A Love of Birds - Hard Cover

The Art of Tony Pridham
Tony Pridham is one of the world's foremost painters of the birds. A Love of Birds showcases 35 years of his work, from the quickest of sketches through to his magnificently detailed oil paintings.

This book follows Tony's travels in pursuit of birds, from parrots in Australia to hummingbirds in Ecuador. Appealing to both Art and Nature lovers alike, his wonderful paintings bring these beautiful feathered subjects to life.

Tony's art has been published in a number of science based natural history books. Most notable are his two latest award winning publications:

Both books received Whitley Awards for Excellence in Zoological Illustration.

"Grassfinches in Australia” is a substantial, large-format book comprising over 300 pages and a mixture of text and beautiful artwork by Tony Pridham. Indeed, the book is worth buying for the images alone, and my guess is that many people will do just that ." 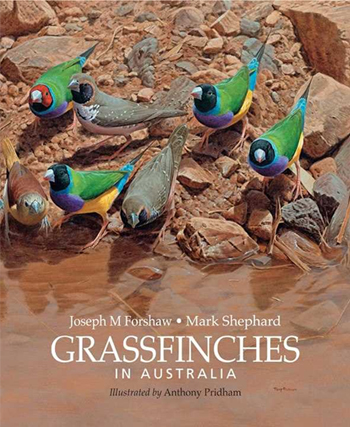